Release of New “Out of Reach” Study

However, according to the National Low Income Housing Coalition’s 2019 “Out of Reach” report, outlining the affordability of housing across the country, rental housing remains out of reach in terms of affordability for many low-wage workers. The report lists the housing wage: the full-time hourly wage required for a person to afford a modest two-bedroom apartment at the fair market rate for each of the 50 states. All of the figures in the report are based on HUD’s recommendation that no more than 30% of a household’s income should be spent on housing costs; those who spend more than 30% on housing are considered to be “cost-burdened,” and may have difficulty affording necessities such as food, clothing, transportation, and medical care. Households that spend 50% or more of their income on housing costs are considered severely cost-burdened.

In Vermont, where nearly 30% of the population is made up of renters, the housing wage is $22.78 per hour, a full $12 higher than the current state minimum wage, requiring a minimum wage-earner (at the time of this posting) to work at least 85 hours each week to afford rent for a two-bedroom apartment. As a result, Vermont has the 16th highest housing wage and the 6th largest affordability gap in the country. In Washington County, the average full-time worker hourly wage is $13.33, which would allow them to afford $693 per month for rent. The full report on Vermont’s housing affordability can be downloaded here.

As illustrated below, Washington County has less than half the number of affordable rental units needed to house the extremely low-income (ELI) households there. 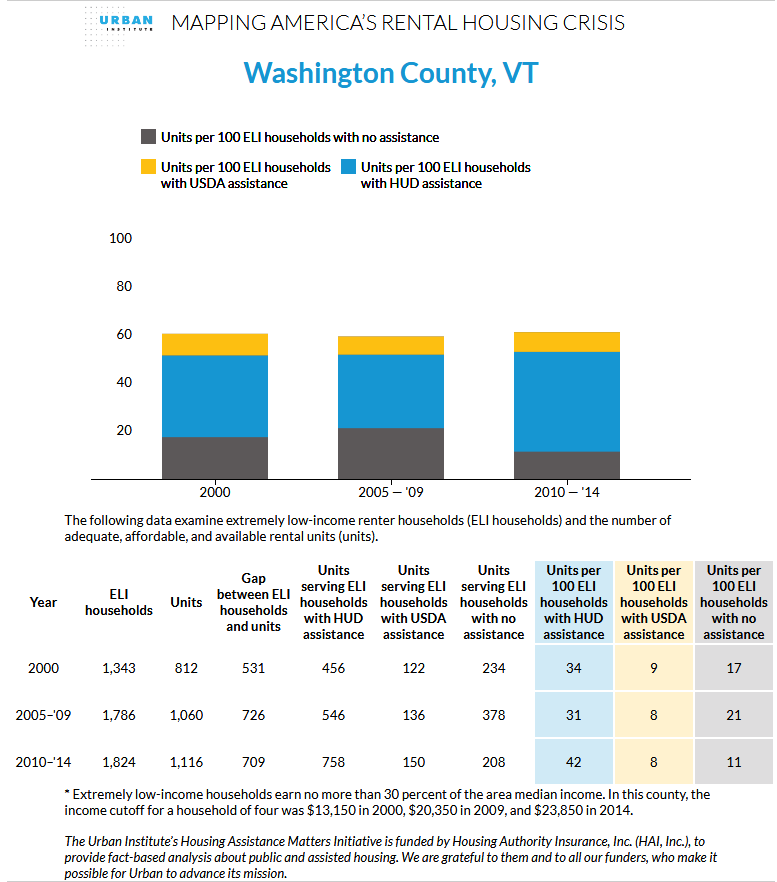 What does this tell us about the state of affairs here in Vermont? For one thing, it tells us that this work is necessary; clearly more affordable housing is needed. But the numbers also show that we have made progress since the early 2000s, and we can continue to make progress by sustaining the work we’re doing to create affordable housing opportunities for our neighbors throughout Vermont. By investing in high-quality, well-managed, safe housing that people can afford, we minimize evictions, thereby reducing homelessness, and create economically diverse communities that lead to positive outcomes for all.

New Board Members and Leadership

3 min
256
We are happy to welcome two new members who were elected to our Board of Trustees at this year’s annual meeting, and a new President of the Board, elected at our May board meeting. Longtime Vermont affordable…
Blog Search
Share This Post
Trending Posts
3 Ways to Be an Effective Advocate for Affordable Housing
2 min
How Climate Change Disproportionately Impacts People of Color
3 min
The Roots of the Modern Housing Movement
3 min
Taylor Street and Transit Center Celebration
2 min
5 Ways to Stop S.A.D. and Feel Happy
4 min